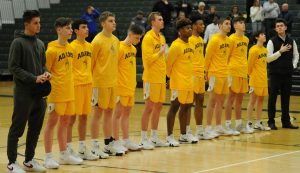 BIRMINGHAM – The young pup played like the big dog he seems destined to become. 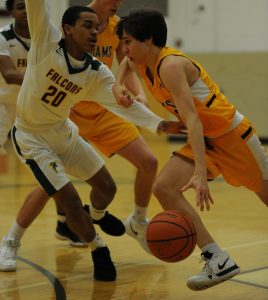 Rochester Adams’ coldblooded freshman combo guard tied Tuesday’s seesaw OAA White affair on the road versus a pesky Birmingham Groves club with an acrobatic “and-1” and then won it with a free throw at the 2.6 mark of the fourth quarter, as the visiting Highlanders escaped with a 49-48 victory on the boys basketball floor.

Adams (7-2) fell behind 29-22 at the half after Groves (6-4) ended the second quarter on an 8-0 run and an Aaron Forbes 3 to beat the buzzer going into the locker room. Star sophomore point guard Ethan Emerzian’s triple with 1:28 left in the third quarter gave the Highlanders their first lead of the second half, 36-34. His five straight to open the fourth put Adams ahead, 43-37.

Groves’ sophomores Mark Watson (forward) and Jack Woods (guard) got into the mix late and Watson’s transition bucket off a steal and set-up from Woods gave the Falcons the lead back at 46-45 with 2:10 remaining. Falcons forward John Garrett hit two free throws at the 1:08 mark to make it 48-44 home team, but Walters personally seized the game’s momentum on the ensuing possession courtesy of a picture-perfect drive into the lane and finish. The diminutive, yet fearless freshman split the Groves defense and converted a hoop in traffic where he switched hands, took contact and flipped the ball into the basket.

“I saw the lane open up, got by my man and just attacked the rim” he said.   “I had to keep my composure and take care of the ball.”

On a rebound scrum in the final seconds down at Adams’ end of the court, Walters was fouled and calmly sank the first end of a two-shot trip to the free throw line. Highlanders’ junior center George Gurraj snared the board on a Walters miss on the back end of the trip to secure the win.  Walters scored all 10 of his points in the second half. He is the son of retired NBA vet Rex Walters, a former assistant coach for the Detroit Pistons. Emerzian fueled the Adams’ offense Friday with a game-high 15 points. Standout Highlanders junior wing Peyton Prieskorn left the game in the first half with an ankle sprain. 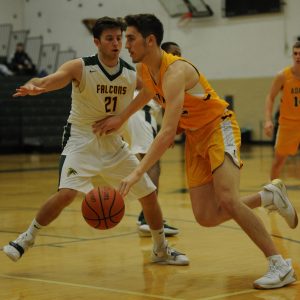 “It was a tough, ugly win, we’ll take it though,” Adams head coach Brad Crighton said. “We were flat in the first half, but we adjusted, got our flow back and started moving the ball around better in the third and fourth quarters.”