SOUTHFIELD – Peyton Prieskorn returned to the lineup, Ethan Emerzian was his usual deadly self and Rochester Adams took another step towards an OAA White championship, ripping and roaring to a spirited 63-53 victory over host Southfield A&T in boys basketball action Tuesday night.

Prieskorn’s two consecutive 3-pointers midway through the second quarter put the Highlanders ahead for good (18-13). The 6-foot-5 junior wing had missed the past four games with an ankle sprain. Adams went on top 30-25 at halftime and Emerzian’s driving bucket in the lane and a twisting reverse lay-up by Prieskorn in heavy traffic got the third quarter started the same way the second ended, with the Highlanders surging. An Emerzian triple from the right elbow made it 45-33, vaulting his club in front by double digits to stay at the 2:42 mark of the frame.

Prieskorn scored seven points in a row to open the fourth quarter (a 3-pointer from the right baseline sandwiched in between two sets of free throws) gave Adams a 54-35 lead with 5:18 to go. He posted 16 points and seven rebounds in the win.  “Getting Peyton back helps on both ends of the floor, his length, his shooting, his athleticism, it’s a tough match up,” Highlanders head coach Brad Crighton said. 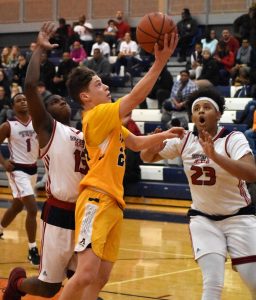 Emerzian is one of the best sophomore guards in Metro Detroit. Besides busting loose for a game-high 24 points, he teamed with his twin brother Jake in shutting down scorching-hot A&T senior guard Cameron McEvans, who recorded his fourth effort of 40 points or more last week when he dropped 40 in a defeat of Troy Athens. Hounded and hassled by the Emerzian brothers all game, McEvans only had 11 points Tuesday.  “Having Peyton in there again is huge for us,” said Emerzian of how Prieskorn’s presence solidifies the Highlanders’ attack. “He’s a playmaker on offense and defense. He makes a big difference.” 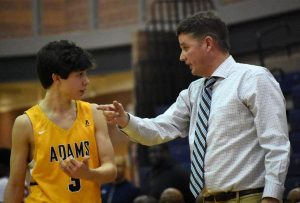 Adams (11-2, 6-0) remains undefeated in league play. The Highlanders have won 11 straight and head to Farmington for their next contest Friday.

A&T (6-5, 4-3) entered Tuesday’s affair against league-leading Adams owners of a three-game winning streak. Third quarter woes did the Warriors in against Adams, as they shot a frosty 33 percent from the field.

“We had a lack of communication tonight, we were full of ourselves, we let that little bit of success (the squad’s three-game winning streak) go to our heads……..there’s perception and there’s reality, tonight we got a dose of reality,” first-year Warriors head coach Darryle Buchanan said.

Warriors’ senior center Brandon Baldwin highlighted the A&T stat sheet by scoring a team-high 13 points and snatching eight boards. A&T gets back to work Friday on the road versus Rochester.