Article and photos courtesy of MIPrepzone
By Drew Ellis

ROCHESTER >>  In a game that has been representative of their season, the Avondale Yellow Jackets overcame a slow start to pick up a 54-40 road win over Rochester Adams on Thursday.

“Adams plays very hard and you have to match that level of intensity,” Avondale coach Bob Lees said. “To 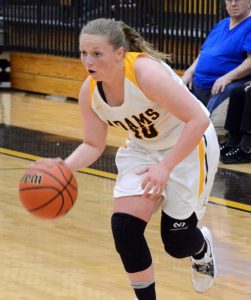 be able to win on the road here is a good win for our team. We just have to keep moving forward now and keep getting better with each practice.”

The win keeps Avondale right in the mix in the OAA White, as they sit at 5-1 in conference play. The Yellow Jackets trail West Bloomfield (6-0) by one game in the standings with the two set to meet at Avondale on Feb. 7.

“I think this team can compete for the league championship if they continue on this path, but I don’t think we are nearly as good as we can be,” Lees said. “I think we are getting closer and we have improved, but we need to be more consistent to really hit our full potential.” 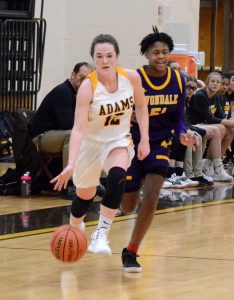 Adams falls to 3-3 in conference play, but the Highlanders were playing with heavy hearts following the passing of a classmate this week.  “I am extremely proud of our girls. It has been a tough few days for them and some were struggling just to put their uniforms on today,” Adams coach Shay Lewis said. “I am really proud of the effort they showed. These girls gave their all and have improved a great deal.”

The Highlanders held a lead for most of the first half thanks to some strong shooting. Junior Nicole Claerhout hit a pair of quick 3-pointers to help Adams establish a 6-1 lead. She would finish with 11 points in the quarter to give the Highlanders a 13-8 lead heading into the second.

“Nicole has been improving every year and she has really blossomed into a great shooter for us,” Lewis said of Claerhout. “It was great to see her hit those early threes for us and give us some momentum.”

Despite trailing, Avondale was dominating on the offensive glass and that finally paid off in the second quarter. The Jackets would open on an 8-0 run to take a 16-13 lead that they wouldn’t relinquish.

“We knew (Avondale’s) length would be an issue and we wanted to try and use our speed to our advantage. We did a pretty good job with that, but the length was really a factor when it came to rebounding,” Lewis said.

Avondale held a 27-22 lead at the break and then held Adams scoreless for the first five minutes of the third quarter, going on a 7-0 run to establish a 34-22 advantage.  “I thought our defense got a lot more aggressive in the second half and that made (Adams) take shots that they didn’t want to,” Lees said. “That allowed us to get into transition and when we do that, we can really score the ball.”

Another 7-0 run to start the fourth quarter allowed Avondale to put the game out of reach. The Yellow Jackets shot 14 of 21 from the line to keep the Highlanders from getting back in the game.  Olivia Russell and Keiori Lee each scored 16 points in the win for Avondale while Taniah Jackson had 14.

Claerhout finished with 14 points for Adams while Amelia Drahnak and Elizabeth Blaine each scored six.