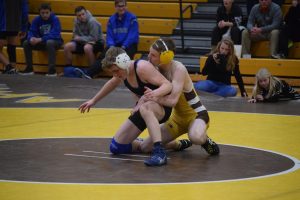 “It was nice, we came out and we weren’t overly pleased with how we finished against Rochester because they were coming after us. Some of my guys need to know how to finish matches and keep their mouths shut,’’ Adams coach Mike Holtz said. “That’s something we’ll work on, but good for Rochester for coming after us.

“It’s a bunch of hard-fought matches, Rochester the first round came out – the district tournament does something to everybody, I think,’’ Holtz said. “Crosstown rival or not, it doesn’t matter how things went the first time. There were a lot of 1-point matches, a lot of matches that came down to the buzzer and we were very pleased to come away from that.”

He credited the three other competitors in the dual meet.

“The Falcons are always tough, they’re well coached by coach (Erik) Vernon. We knew coach (Jed) Kramer and the Cougars were going to come after us. They’re younger (while) we’re kind of an upper-class heavy kind of program. I’m pleased we came out looking to win the district in our gym and we did. It’s a testament to the senior class,’’ Holtz added.

The Adams coach said his Highlanders were fired up to wrestle at home in the district.

“When we found out we were hosting, my seniors — their class started with 10 or 12 guys and we only have 5 or 6 left because of the general grind from freshman year to senior year. It’s nice for them to celebrate with their family and friends and under our roof,’’ Holtz said.  He noted seniors Jacob Postek (119), Jack Dunn (140), Joey Eble (145), Joe DiCresci (185) and Kyler O’Grady (189) all wrestled well. 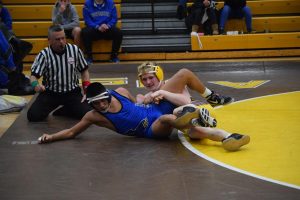 “Kenny Jackson, a junior at 152, he pinned both of his kids and against Rochester they were right there with us and Kenny Jackson comes out after a close match the first time and he got a pin,’’ Holtz said. “It wasn’t expected but it was a nice surprised.’’

To make it to the finals, Stoney Creek defeated Utica Eisenhower, 46-27. “I thought it was going to be closer than it was, we wrestled well and ended up winning pretty handily,’’ Stoney Creek coach Jed Kramer said.  He wasn’t surprised that they were dominated by Adams.

“We have a young team and honestly Adams they’re a very experienced team. They have a lot of upperclassmen in their lineup. Our goal coming into district was to win that first dual. Small steps, we’re building our program,’’ Kramer said.

“Next year the goal is to take Adams out. One step at a time. We were able to get a lot of guys experience tonight, we mixed our lineup up a little bit, we had some different guys than we had wrestle in the second dual,’’ Kramer added.  The Cougars ended the season 17-7.

Adams is 24-8 which obviously pleases Holtz.

“The teams we’ve competed against, we’ve been in every match we haven’t been blown out,’’ Holtz said. “Clarkston put a good licking on us and they’re pretty darned tough. Coming into this season we didn’t know, we only graduated a few, every year is like a new book.’’

Last year they lost a close one to Lake Orion in a district tournament. Adams has now won three of the last four district championships.  “We’d like to continue that, but we’d like to be competing at the regionals,’’ Holtz said.