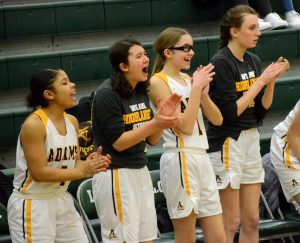 Article and photos courtesy of MIPrepzone
By Drew Ellis

LAKE ORION >> The Rochester Adams girls basketball team has learned its fair share of lessons during the 2018-19 season. 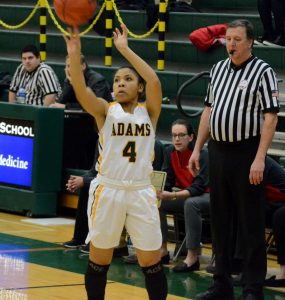 “Our regular season has been a roller coaster and it really provided us for moments like these,” Adams coach Shay Lewis said. “We have been down and rallied from big deficits and we have lost leads late. All year long I have been preaching discipline to this team and they showed a lot of discipline in this game. It wasn’t always easy for us, but the girls stayed with the game plan and earned a really nice victory.”

The Highlanders trailed most of the first half of the game before Maddie Dolenga hit a basket in the closing seconds of the second quarter to give Adams a 20-19 lead at the break.  Adams wasn’t able to ride that momentum in the third, as Romeo held the Highlanders to just one point and took a 25-21 lead into the fourth quarter.

“Basketball is a game of runs and I knew (Romeo) was going to come out looking to make a run after we got that final basket of the half,” Lewis said. “Who would have thought, scoring one point in the third quarter, you would still be able to win the game. The girls just had to stay the course and keep attacking the basket.”

The Highlanders returned the favor defensively in the fourth, holding the Bulldogs scoreless for the first 7:25 of the quarter. During that time, Adams scored 11 points to pull away from Romeo. 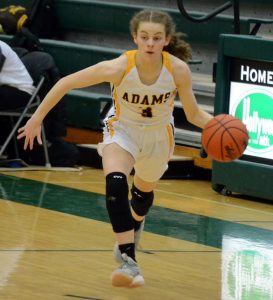 Nicole Claerhout started the rally with a 3-point play on a foul to make it 25-24. Lauren Petersmark then hit a long jumper two minutes later to give Adams a 26-25 lead and Elizabeth Blaine scored moments later to make it 28-25.

A key moment in the game came when Romeo’s Olivia Medaugh looked to get the Bulldogs their first points of the period with 2:50 to play, but the basket was called off on a charging violation.  “I think for us, if we would have gotten the basket instead of the charge, that would have been the whole difference in the game,” Romeo coach Kathy Bosheers said. “I think that would have given us the boost we needed. Hats off (Adams) though, they played us very hard all game.”

The Highlanders sealed up the win by going 8-of-12 at the line in the fourth and holding off a late run from Romeo in the closing seconds.  Dolenga finished with 12 points to lead Adams in the win while Amelia Drahnak had seven. 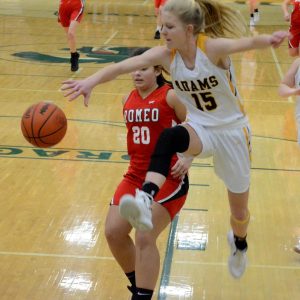 The Highlanders will now compete for a district championship on Friday when they face Waterford Kettering at 7 p.m. from Lake Orion High School. Kettering defeated Clarkston in the other semifinal on Wednesday.  “We have a really young team and they are just excited about a chance to play for a district championship,” Lewis said. “I think they are nervous, but they are excited about the opportunity and we are going to enjoy the ride.”