LAKE ORION — The Waterford Kettering girls basketball team won its first district title under coach Cory Hightower. He could not have been more proud.  The Captains defeated Rochester Adams, 69-61, at Lake Orion High School to win the Division 1, District 6 trophy on Friday night.

“I’m super proud to win districts with this group because this group has truly worked hard and treated me with the utmost respect and I appreciate that,’’ said Hightower who is in his first season with the Captains.  Now Kettering (16-7) will face Walled Lake Western (22-1) in the regional semifinals at 5:30 p.m. on Monday at White Lake Lakeland.

On a scrappiness scale of one to five, Friday night’s game was a five.  “Adams is tough and scrappy, that’s my type of team,’’ Hightower said. “I love that type of grit and grind. They were scrappy tonight, they gave us a hard-fought battle.’’ 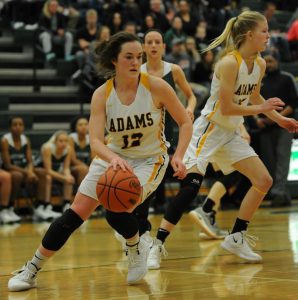 Adams’ defense had something to do with that too.

“I wish we had Kettering’s height but we don’t,’’ Adams coach Shay Lewis said. “We have to use our speed, we knew that tonight. We had to use our bigs, our bigs had to come through and rebound for us and they did our job. Our seniors Brianna McKerracher and Gabby Mack came in and rebounded and did a great job. I feel sorry for them I know they wanted to keep playing.’’

The second half was a different story. Kettering went on a 17-3 run early in the third quarter to take a 48-31 lead.  “The second half we came back, made adjustments and got into a 22 press. They couldn’t move the ball quite frankly. We started getting turnovers and getting layups,’’ Hightower said.

On Friday, Watson scored a team-high 17 points while Izzy Dugal added 14 and Barghahn finished with 11.

Adams, which defeated Romeo to make it to the district title game, depended on its four captains.  “Amelia Drahnak our junior, Nicole Claerhout our other junior, Maddie Dolenga our sophomore and 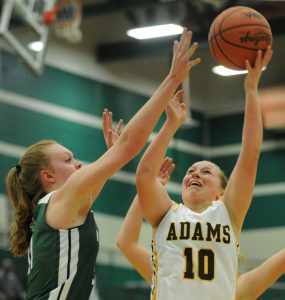 Lewis said it’s been a roller-coaster season.  “We’re so young, a lot of learning, a lot of growth. I feel we peaked in this district tournament which is when we wanted to peak,’’ said Lewis who will lose just two seniors to graduation.  “What we did tonight is the culture that I’ve been trying to preach into this program is to work and fight until the very end,’’ Lewis said. “That’s what we did tonight, I couldn’t be more proud.’’