Articles and photos courtesy of MIPrepzone

By Dan Fenner
ROCHESTER HILLS >> A genuine pitchers’ duel dominated the first contest of a three-game week-long series between Rochester Adams and Lake Orion on Monday.

Narrowly edging out the performance of his counterpart on the mound, Adams junior Nick Picot threw a complete game shutout, allowing just one hit and one walk in the Highlanders’ 1-0 win. 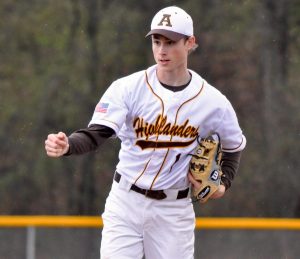 “I had pretty good command of my fastball. My curveball didn’t sit at first, but I got it going later on in the game,” Picot said. “There was great defense behind me with (shortstop) Connor McClennen making plays all over the place.”

On almost any other day, Lake Orion starter Josh Slayton’s outing would have been enough to earn a victory. The left-hander allowed just three hits across six innings, permitting one lone run in the third on a check swing that went for an unlikely single. 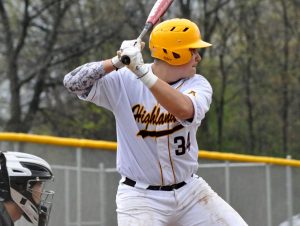 With two outs, Adams senior Preston Bowker delivered the game’s only run, scoring McClennen from third.  Picot took care of the rest. The right-hander kept the base paths clean in 5-of-7 innings while inducing ground ball after ground ball to keep things moving. The only hit he allowed was quickly erased on a double play turned in the second inning.

“He’s thrown well every time out and gotten better at getting ahead of kids (in the count). He’s done a good job of getting the leadoff guy out,” Adams coach Jeff Hall said of Picot.

“He’s kind of sneaky fast. He throws hard enough, his windup is slow, but then the ball jumps out of his hand. He threw three pitches for strikes in all kinds of counts today. If you do that, you’re hard to hit. It was just like what (Lake Orion’s) Slayton did. Their kid was good too.”

Not to be overlooked, the Highlanders’ defense was particularly sharp, especially dealing with a rain-slicked field.  “Connor McClennen made seven (assists) up the middle and two diving plays,” Hall said of his senior shortstop. “He’s as good as there is around here. He’s a vacuum cleaner out there – a pitcher’s best friend.”

The victory upped Adams’ OAA Red Division record to 4-3, while Lake Orion dropped to 5-3. At roughly the midway point of the regular season, all six of the teams in the division remain in the hunt for the title in a race that has featured an inordinate number of one-run games.