ROCHESTER HILLS — Rochester Adams’ depth and its ability to get back on track after a sloppy start was just too much for Rochester to handle.

The crosstown rivals met for the 49th time to open the high school football season, and for the 22nd straight time Adams emerged victorious. This time it was with a 60-24 win on Friday night at Rochester Adams.

“Good and bad, right? Sloppy, sloppy game. We have some things to clean up as we progress through the OAA Red, for sure,’’ Adams coach Tony Patritto said.

He pointed out they had breakdowns on both sides of the ball in the first half which is not usual.  “We cleaned it up a little in the second half,’’ Patritto said.

With such a commanding lead, he was able to substitute heavily in the second half.

“I’m really happy that we got everyone in the game. our sport is under attack, it’s the best thing for kids when you get a chance to play everybody on our roster it makes me feel a lot better,’’ Patritto said.

The game got off to an odd start. On its first series, the Falcons tried to punt on fourth-and-18, but a bad snap sent the ball sailing 35 yards back into the end zone. It was recovered by Adams for a safety. 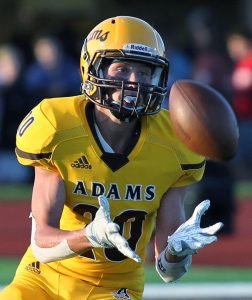 Then when Rochester kicked off to Adams on the next play, Parker Picot returned the kickoff for a touchdown.  “Not bad for a freshman,’’ Patritto said.

So with 9:37 left in the first quarter, the Highlanders were up 9-0 and had not had one offensive snap.

After the touchdown, the Falcons went three-and-out again and on fourth-and-20, they tried to punt but had another bad snap which resulted in another safety for Adams. That gave the Highlanders an 11-0 lead with 8:28 left in the first quarter. Still not one offensive snap.

As the game continued, neither offense could find a good rhythm. Rochester’s Camden Williams intercepted Adams senior quarterback Carter Farris late in the first quarter and returned the ball 37 yards to the Adams’ 9-yard line. Rochester settled for a Williams’ 23-yard field goal which got them on the board.

In the first quarter, each team just managed one first down.

Adams’ senior Anthony Patritto got more work as the game developed, finishing with 13 carries for 86 yards. A few times cramping sent him to the sidelines but he always made it back into the game.

Farris connected with Patritto, the coach’s son, on a 64-yard touchdown pass play to give Adams a 32-10 lead with 1:42 left in the half.

“He did OK, we can’t be cramping any more. It’s hot, it’s early in the season, we trained our butts off so that wouldn’t happen – hydrate, pickle juice, – that just happens,’’ coach Patritto said. “We ask a lot of him. He does a lot of things for us, kick (team), punt (team), everything. I’m proud of him, he’s a tough kid.’’

Farris, the quarterback, is a tough guy too. In a playoff loss last fall, Farris broke his leg during the game and has fought back ever since. 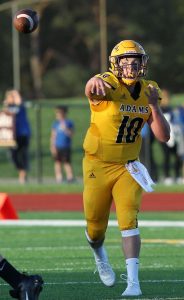 “A little shaky early, but he got it together in the second half, the second quarter especially. The third quarter he made a really nice throw,’’ Patritto said. “He’s very courageous, a great kid. I’m really happy for him.’’

Rochester came back when junior Andrew Hebekeuser scored on a one-yard touchdown scamper with seven seconds left in the half.

The Highlanders took a 32-17 lead into the locker room at the half.

“We answered pretty well in the first half, I thought we responded to some of that adversity in the first half,’’ Rochester coach Erik Vernon said. “We came out in the second half, we had to kind of toughen up. We didn’t really do what we needed to do so we have to work to get better.’’

The Highlanders opened the third quarter with a touchdown drive that was capped by a 26-yard pass to senior Nick Picot to give Adams a 39-17 edge.

“As a coach without a 3-score lead I’m always not happy,’’ Patritto said. “Until we got there I was a little nervous.’’

Midway through the third quarter, Patritto ran 3 yards to the left corner of the end zone for yet another touchdown and a 46-17 lead. Senior Maurice Swain scored the next Adams’ touchdown on an 8-yard scamper to take a 53-17 lead. At that point, the clock was running due to the 35-point lead.

Adams’ final touchdown was a fumble recovery for a touchdown.

Rochester added a late score as time ran out when junior Andrew Koss ran in four yards to score.

It just wasn’t the start to the season that Rochester wanted. A year ago, they lost to Adams in the opener in overtime.