Article and photos courtesy of MIPrepzone
By Dan Fenner 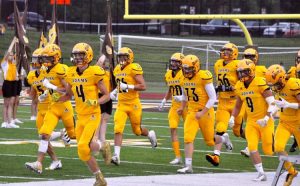 ROCHESTER HILLS — From an X’s and O’s standpoint, Friday’s contest produced a lot to like for Rochester Adams, which handily defeated Oxford, 31-7, to improve to 2-0 on the young season.

But on an emotional level, the Highlanders’ spirits were dampened following an injury suffered by senior standout Anthony Patritto – son of head coach Tony Patritto.

Early in the second half, Patritto remained down on the field after being involved in a play offensively. After a prolonged delay in which he received medical attention, Patritto was taken off on a stretcher with what his coaches later believed to be a serious lower-body injury.

Forced to carry on amid difficult circumstances, the rest of the Highlanders took care of business to wrap up the victory.

“Our guys dealt with the adversity of seeing Anthony get hurt and having to continue and finish the game,” Adams assistant coach Mark McFarland said, filling in for Tony Patritto, who left to attend to his son. “While we can talk about things that happened in the course of the game — we didn’t start off great, but finished strong — the focal point and the worry is Anthony and (our) ability to say we have to finish the game. They did just that. I’m extremely proud of them.”

Adams entered the second half with a 28-7 lead, which only widened from there.

“People were of course shocked and quiet,” McFarland said. “I think (our players) just kind of turned to each other and said, ‘Alright listen. It is what it is and we have to finish the job.’ It was the senior leadership that helped bring it through. It needed to be that way.”

Prior to the injury, Patritto was a differen 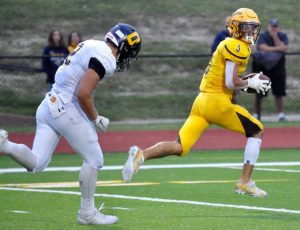 ce maker for the Highlanders, having been on the receiving end of two long touchdown throws from senior quarterback Carter Farris in the second quarter. Twice, Patritto shook free of the Wildcats’ coverage to post scoring grabs of 46 and 51 yards.

“They whooped us on offense, they whooped us on defense, and the whooped us in the kicking game,” Oxford coach Bud Rowley said. “We didn’t do a whole bunch right and hats off to Adams. I hope that young man’s injury is not too bad.”

The Wildcats were competitive early, but missed a ch 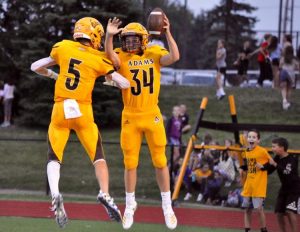 ance to take the lead when their opening drive stalled at the Highlanders’ 21. Instead, Adams found the end zone first on a 34-yard touchdown run by Griffin Henke late in the opening quarter.

Oxford managed to tie the game by capitalizing on an Adams turnover that gave the Wildcats the ball with a short field. An 8-yard touchdown run by senior Matthew Pullman on the next play made it 7-7.

The rest of the game belonged to the Highlanders, however, with Patritto’s two touchdowns and another 11-yard score by Henke coming before halftime.

“There was a lot of good,” McFarland said. “In the beginning of the game, with the dis 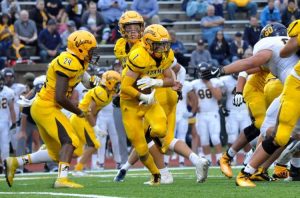 cipline of Oxford and how good they are, we needed to get game speed adjusted. Over the course of time, we did. The kids played better and better as the game went on.”

The early-season emergence of Henke, just a sophomore, has given the Highlanders’ offense another weapon to utilize in the backfield. “It’s nice (to have Henke) with Maurice Swain, who is a fullback and plays linebacker for us. Obviously, it’s a tiring spot, so to have Griffin be that guy who shares the (running game) with him, he really does a wonderful job and plays with great pace,” McFarland said. “Scoring a couple of times tonight was great. That tandem, between the two of them is what makes it work.” 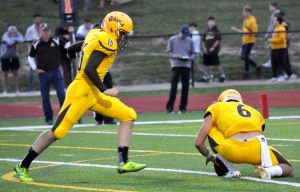 al, while senior Ethan Kaiser recorded an interception for the Highlanders.

Looking ahead, Adams will travel to Lake Orion next Friday, while Oxford (0-2, 0-1 OAA Red) will play its third straight road game to start the season at Bloomfield Hills.