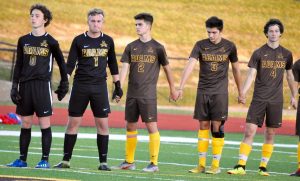 Article and photos courtesy of MIPrepzone
By Dan Fenner

ROCHESTER HILLS >> Though it will go into the books as a tie, Rochester Adams left the field Tuesday feeling a little bit like the winner after rallying from two goals down to force a 2-2 draw.

Facing Berkley in an OAA Red Division contest, the Highlanders scored twice in the final 22 minutes and netted the equalizer with just 1:41 remaining.

“For us, it does (feel like a win). We’ve had some tough results,” Adams coach Josh Hickey said of his team’s season-to-date. “To my team’s credit, our results have rarely been big deficits. They’ve always been tight. For today, this was huge.”

With the clock winding under two minutes to play, Adams was afforded a big opportunity late with a corner kick. Senior Jack 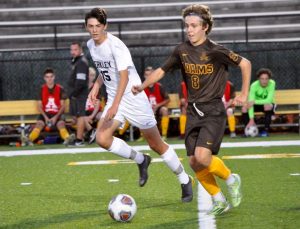 Wardle’s service from the corner bent low toward the back post to senior Jasper Youngman, who connected on a line drive shot past the keeper.

“It was a nice corner kick. Jasper just one-timed it and volleyed it in,” Hickey said. “I’m proud of him. That was so perfect to end that game.”

After being in control for most of the contest, the end result was disappointing for Berkley, which took a 2-0 lead in the 15th minute of the second half.

“We came out strong and we got the two-goal advantage. With our back line, we should be able to close games out, but tonight, we had two mistakes and it cost us,” Bears coach Steve Wloszek said. “Congrats to Adams for fighting to come back for the tie.”

Berkley opened the scoring with 8:48 remaining in the opening half. On a play that materialized quickly, senior Ari Belchinsky gained possession in the offensive third of the field and delivered a pass into the center of the box for teammate Scott Smith. Smith’s shot was fought off by the Adams keeper, but Belchinsky was the first to reach the rebound and booted it home.

“It was really good high pressure by our forwards to cause a turnover,” Wloszek said. “That created a good shot from the top of the 18 (yard box) and we got a rebound off of it. Our forwards played really well up top and put high pressure on that (Adams) back line all game. It caused a lot of mistakes in their defensive third.”

The Bears later scored off a corner kick taken by junior Jacob Schleicher, which was poked home in front by senior Mico Rubio for the goal.  Adams sophomore Colin Rase cut his team’s deficit in half five minutes later with a goal to begin the comeback.