Article and photo courtesy of MIPrepzone
By Paula Pasche

ROCHESTER HILLS — Mental toughness was the key in the opener of the OAA Red volleyball season for Stoney Creek and Rochester Adams on Thursday night.

“It was a little sloppy for the first night, our first-ball contact had a little problem but we came out with the win on the third set,’’ Cougars coach Ross Talbott said.  After winning the first two sets fairly easily, the Cougars started the third set with a 4-0 run thanks in part to the serves by Ella Markevics.

Adams, however, fought back taking their first lead at 24-23. On a 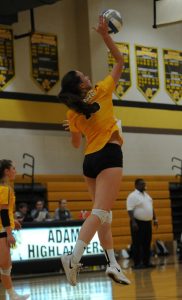 bad serve, the Cougars tied it at 24-24, then grabbed the 25-24 lead on an Adams miscue. These close sets are becoming a trademark for Stoney Creek which is 15-4 overall.

“It’s the fourth or fifth time this year on a set that’s really, really close that we’ve come out on top,’’ Talbott said. “It says a lot for our team. Mental toughness — we beat Lake Orion 29-27, we played Grand Blanc and i think the fourth set it was 32-30, tonight 27-25. Last weekend we had a set i think against somebody that went 29-27. We’ve come out on top every single set that’s been really close and getting those high numbers. It tells you we have a lot of mental toughness on this team.’’

It was a total team effort for the Cougars.  Senior Kate Stration (Cornell) was one of the standouts.

“She’s a heck of a player all-around, six-rotation kid, her passing and her defense is just great, Obviously her hitting is there too. She’s a big force for us,’’ said Talbott who didn’t have game stats. Sydney Tomlak, whose nickname is Squid, also was strong. “She’s only a sophomore she’s got some growing to do, she’s going to keep getting better and better,’’ Talbott said.

Our right side that plays six rotations is Katie Yatooma. She’s been a big force already for us this year, on defense, back row attacks and her hitting percentage is through the roof. Ainsley Guse, our 6-foot-2 middle, she’s been big for us, she had some real good blocks tonight I think she ended with 6 or 7 blocks.’’

He said setter Ella Markevics is doing an amazing job, noting she got a block in the front row.

“Our libero, Halie Lieffers, is actually a setter and we had to put her in the libero position,’’ Talbott said. “Ashley Gajdzik is a leader on the floor, one of our captains, our other middle. She’s playing a position she doesn’t usually play.’’

The Highlanders (7-5) are led by first-year coach Terry Baughman who previously coached at Walled Lake Northern. 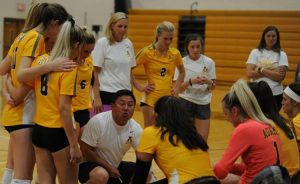 “I’m not happy with the loss, I don’t like to lose, but they’re still having to learn the system. They’re still going to have to learn how to play in a different way,’’ Baughman said. “Our expectations are a little bit different — they’re still learning that, but when they really work at it and play aggressive and stay aggressive I think we can compete with almost anyone. I never promise them wins, but I can tell you they can compete. We just weren’t mentally tough the whole time and that’s what happened.’’

Even though they didn’t win the third set, he saw positive signs.

“They kept fighting, they started understanding being mentally tough, hitting the spots we asked them to hit, getting the swings we wanted them to swing, our blocking got a little tougher, we started getting a little more aggressive on the net,’’ Baughman said. “I thought we had them where we wanted them, credit to them.’’