Article and photos courtesy of MIPrepzone
By Michael Wallwork

ROCHESTER HILLS >> The Rochester Adams Highlanders claimed the Division 1 district soccer title on Wednesday night with a 2-1 win over the Lake Orion Dragons. 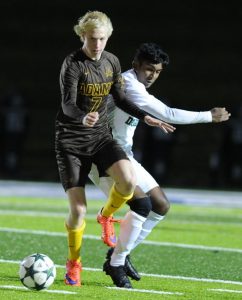 “These guys never quit. Honestly, it’s one of the best victories and playoff runs I’ve been a par of so far just because these guys have been up against everything. They never quit and battled through everything. We had things happen in the game, injuries we had to battle over, and I’m just super proud of them,” Adams head coach Josh Hickey said. “But hats off to Lake Orion. They were tough. They had a good game plan. We just had a couple fall in.”

“Kudos to Adams. They’re well coached. They’ve been there before. They played very well. They played hard, fair. A good team got through,” Lake Orion head coach Chris Corteg said.

Adams got the game-winner with 6:57 remaining in the contest. 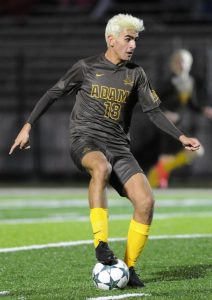 Bruno Escobar whipped a corner kick from the right side of goal past the back post and Charlie Bass headed it back the way it came and into the net for a 2-1 Highlander lead.

“I wasn’t even trying to score,” Bass said. “I was trying to give it to another person. It came off my head a little weird and went top shelf. You can’t ask for much more.”

Trailing 1-0 at halftime, the Dragons had come out strong in the second half. Lake Orion took control and had the better chances early in the half, forcing Adams goalkeeper Ethan Maxwell 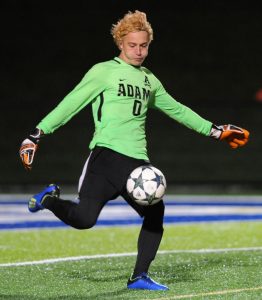 to tip a long shot over the cross bar for a corner kick. The Dragons parlayed that corner into a second corner kick, and Lake Orion would score off that corner. Michael Boger fired the corner out to the top of the penalty area where Neethan Punniyamoorthy was waiting to ram it home from 22 yards away to tie the game with 28:31 remaining.

“We chased. I felt good at halftime down 1-0 getting the wind. We tied, and we just messed up on a corner,” Corteg said. But Adams would refocus and start to regain their attacking mindset. The Highlanders would go on to out-shoot the Dragons 9-4 over the course of the second half, though the Highlanders could only get three of those shots on frame. Fortunately for the Highlanders, one of those was three shots was Bass’s game winning goal.

“They were hungry. They’ve been hungry. They want it. They saw the writing on the wall that they had to work hard to get it, and they just dug in,” Hickey said.

The Highlanders had started as fast as could be when Escobar threaded a ball toward goal, and Nick Kochanski raced in on goal, won the ball from the goalkeeper at the end of Escobar’s pass and scored into the empty net, giving Adams a 1-0 lead just 46 seconds into the game.

Adams would nearly add a second goal just moments later, but Lake Orion goalkeeper John Gertner came up with the save. After that, the Dragons defense would settle into the game behind the play of center backs Rodrigo Gaytan and Jared Currie, and Lake Orion would get into halftime with no further damage and no real chances for Adams after the opening minutes.

With the win, Rochester Adams (8-11-2) moves onto the regionals. The Highlanders will face Chippewa Valley next Tuesday at Troy