ROCHESTER >> And boom goes the dynamite.

Anthony Patritto powered Rochester Adams past a pesky Stoney Creek club, 21-14, on the road Friday night courtesy of some second half TNT. 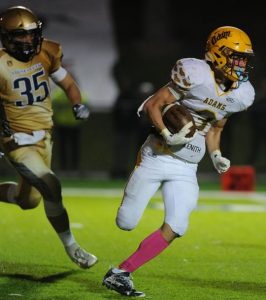 The senior slot back was fantastic with the crosstown showdown on the line. His 56-yard touchdown catch from fellow senior Carter Farris with 3:11 left was the game-winner.  “Anthony just has that gift of making the moment count, he makes big plays at big junctures of the game and he’s been doing that his whole career,” said his dad and Highlanders head coach Tony Patritto.

Adams (7-2) trailed 14-7 at the half. Patritto’s 3-yard trot into the end zone midway through the third quarter deadlocked the game at 14–14. Farris found Patritto for a score from 12 yards out in the first quarter.  “We were too inconsistent in the first half. We shored some things up at the break and went out and played smarter, more physical football,” the elder Patritto said.

Anthony Patritto has 17 touchdowns on the season and is closing in on 2,000 combined yards from scrimmage. Papa Patritto has been stewarding th 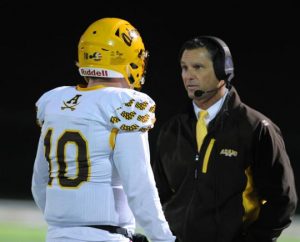 e Highlanders football program since the early 2000s and took Adams to a 2003 state title.

Stoney Creek got both of its touchdowns in the contest Friday from senior running back Zach Denha, one of the more underrated playmakers in the OAA.  Denha’s 11-yard rushing score in the closing moments of the first half provided the host Cougars a halftime advantage it couldn’t keep hold of.

Finishing the regular season 5-4, Stoney Creek will be hoping for an at-large bid into the playoffs.  “Stoney Creek is battling, they’ve played tough, hard nosed football all year….they’ve put some scares into other pretty good teams this season and we saw why tonight,” Patritto said.

The Highlanders begin postseason play Friday evening at 7pm vs. Utica Eisenhower with the game location at Utica High’s Swinehart Field.   Stoney Creek travels to Lake Orion to take on the 8-1 Dragons.