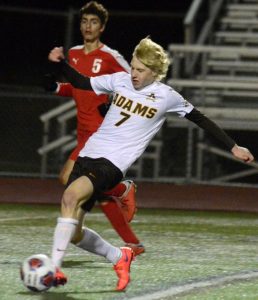 TROY >> The Chippewa Valley Big Reds survived an overtime thriller against the Rochester Adams Highlanders on Tuesday night to advance to the Division 1 regional soccer finals.

“You just got to be patient. You’ve got to stick with it. You’ve got to finish on your chances when you get them,” Big Reds head coach Gerry Haggarty said. “We’ve had adversity throughout the season. We’ve kept our poise, and that’s the advantage of having a senior team. They been there. They know how to handle it.”

The Big Reds’ Adriano Pjetrushi scored with 7:14 remaining in the second overtime, depositing the ball into the left side for a 2-1 lead.

The Big Reds had a handful of good chances in the first overtime as well, but Adams goalkeeper 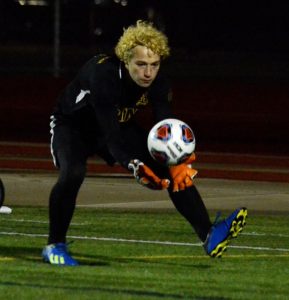 Ethan Maxwell made a pair of spectacular saves to turn Chippewa Valley away. Maxwell finished with 11 saves on the night.

Adams had tied the score with 26 seconds remaining in regulation. With everyone up for a corner kick, David Dinoto got onto the corner on the far side and laid a ball back toward the top of the penalty area where Kyle Ouimet was waiting to drive it home through the crowd in front, making it 1-1.

“I thought we played really well down a guy,” Adams head coach Josh Hickey said. “But there is nothing you can do when a team beats you. They (Chippewa Valley) did the right things in the right moments. They had their couple shots and they put ‘em in at the right time. I wish them good luck against Athens.”

Still, the Big Reds needed to be solid defensively against an Adams counter that was able to create 11 shots on goal on the night, but the Chippewa Valley back line, anchored by Nicolas Pulcini, was generally up to the challenge, holding Adams off the scoreboard until that final shot in regulation.

Playing with the man advantage, the Big Reds came out much more aggressive in the second half than they had been in the first half, and it paid dividends in shots and possession. More importantly, they also dented the scoreboard first when Prenkocevic ripped one in from the right side of goal for a 1-0 Chippewa Valley lead with 18:57 on the clock.

With the win, the Big Red improve to 16-3 and advance to the regional final on Thursday where they face Troy Athens.

“It feels good to get back, and it’s a great experience. We’ve been consistent, and we’ve played good defense most of the year, and that’s what’s got us here,” Haggarty said.

“All of my seniors were really good,” Hickey said. “This team was a bunch of hard workers. There is nothing to be ashamed of in getting this far. It was a lot of fun. I’m proud of them,” Hickey said.