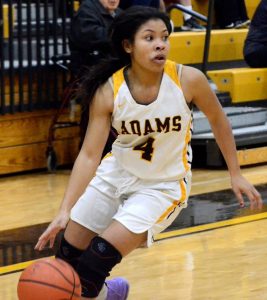 ROCHESTER HILLS — Shay Lewis asked her Rochester Adams girls to show her the type of basketball team they wanted to be.  They came back with a great answer when they handed Troy Athens its first defeat of the season, 48-41, on Friday night at Rochester Adams.

“It’s a booster to us and, again, we just had a real conversation with ourselves, ‘Hey, guys, what type of team do we want to be?’ I left the question up to them and I said, ‘Show me tonight.’ And they showed up,’’ Lewis said. “It was a great win for us. They played hard. We got back to playing good defense the way we were supposed to play, knocked down some shots. I thought it was a great team win.’’

“We felt it was a bad loss. We talked about what kind of team we want to be. We had a really hard practice. We said we needed to step it up and we have a big game coming up with the crosstown showdown so we needed a good win like this,’’ Lewis said. “It’s a great win. We came off a bad loss. We just beat an undefeated team and 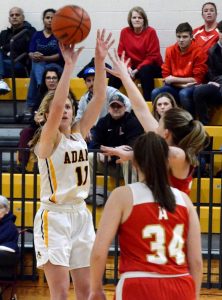 we’re going into the crosstown showdown (against Stoney Creek) with this great win on our shoulders.’’

Adams took an early lead and continued to build on it. The Highlanders were up 28-16 at the half and 35-24 at the end of the third. Senior Amelia Drahnak (left) led with 17 points while senior 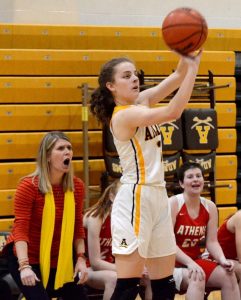 Athens just needed a big run toget back into the game but could never quite catch up.

“I think Adams did a great job taking us out of our game,’’ Athens coach Stacie Klumpp said. “Our goal is to play fast and they played just as fast if not faster than we did, but they were able to control the clock in their half-court a little better. Adams did a great job in slowing the game down when that’s not our style really.’’ 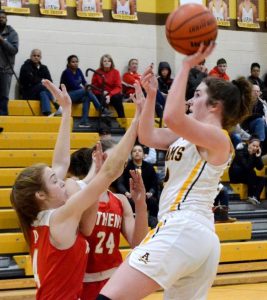 Athens was 1 of 16 from 3-point land. Certainly not a typical night.  “We had three points there and they had 15 from the 3-point line,’’ Klumpp said.  Athens senior Izzy Crum led with a dozen points while sophomore Gillian Ciak added 11 points.