ROCHESTER HILLS —  Rochester Adams coach Shay Lewis had a message for her girls at halftime. 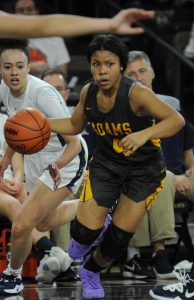 Not only did the girls listen, they followed her directions precisely. That extra defensive effort earned the Adams’ girls team a 43-27 win over Rochester Hills Stoney Creek in the Crosstown Showdown at Oakland University on Friday night. In the later game the Rochester Adams’ boys defeated Stoney Creek, 38-37.

Adams’ girls struggled in the first half, going into the locker room losing, 18-14. But when they turned on the defensive pressure in the second half, they outscored the Cougars, 29-9.

Defense has been an emphasis for Adams (7-4) this season.

“Our offense isn’t as consistent as we would like it to be at this point,’’ Lewis said. “I stress defense in practice, if you can defend you’re going to play, you’re going to get minutes. That’s what propels our offense is we get a lot of steals, transition buckets, our defense is the main thing.’’  She credits her seniors with getting the message across. 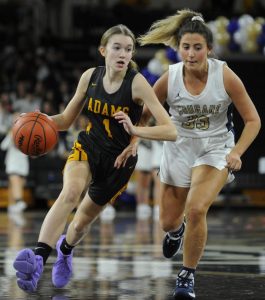 Stoney Creek coach Kellen James said that Adams took them out of their game in the second half.

“They did to us what we’ve done to teams throughout the year. It got to a point, I told the girls at timeout it was like quicksand, things compounded and compounded so the harder we fought, the harder it was to get back into it,’’ James said.

Senior guard Lily DiPanni paced the Cougars (4-7) with 11 points.  It’s not like Adams’ pressure was a surprise to Stoney Creek.

“We really scouted them, we really took a look at them, we knew they wanted to pressure us, we spent three days of practice talking about the pressure,’’ James said. “But their pressure in the second half really got to us — the bad turnovers we had, bad shooting and bad shots that we took and the lack of rebounding. That was my biggest disappointment we didn’t rebound the ball.’’ 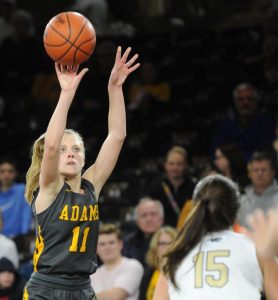 ut three minutes left in the third quarter and was able to hold on and build the lead gradually.

“We’ve got a team of blue-collar workers, we’re hustlers, so it’s just a matter of them understanding how to play hard for four quarters,’’ Lewis said. “We’ve got some kids who can get up a 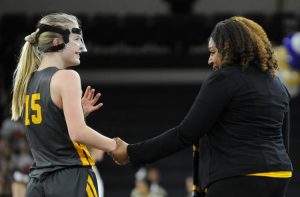 nd go. Our starting center Elizabeth Blaine, she’s the fastest kid on the team and she’s our center. She can go. We’ve got a bunch of speedsters on our team, we know that, we try to run up and down, play hard, play quickly and try to run people out of their games.’’

They may be blue collar but they wear purple sneakers. It was the shoe of choice for the girls even though they don’t exactly go with their brown and gold uniforms.

“I leave it up to them — whatever you want, whatever feels comfortable for you, whatever you think is cute and that’s what they picked,’’ Lewis said. “And when they picked it some of the parents texted me and said, ‘Do you know they’re getting purple shoes? Is that OK?’ I was like, ‘Hey whatever they want.’ I said, ‘You guys look sweet, but now we have to play sweet too.’’