Boasting both the boys and girls individual Regional Champions in each event, Adams will be well represented at the State Finals on February 24th in Boyne.  The boys ski team claimed its fourth consecutive Regional title, with Colin Dehart winning both the Slalom and Giant Slalom events.  Kaylee Richardson and Alyssa Fodale will represent the Adams girls’ team, after Kaylee earned top honors in both events and Alyssa finished 4th and 9th overall, respectively.

Joining Colin on the trip up north will be Zeke King, Jack Snook and Jacob Corsi, who all posted top five finishes in the Slalom, with Zeke finishing fourth overall in the GS event.  Doug Wells finished in 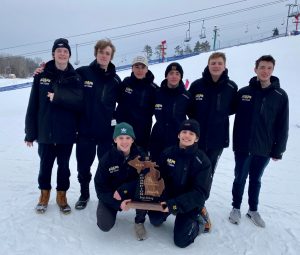 15th in both events and along with Logan Jacobson and Austin Grake, will combine to round out the lineup for the boys team at the State Finals.