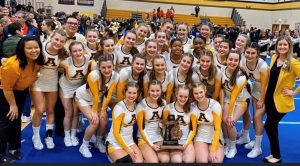 Adams hosted and won the District competition, nosing out Utica Eisenhower, Rochester and Stoney Creek, before advancing to the Regional round, highlighted below.

It was a highly-competitive cheer regional at Troy Athens on Saturday, with the four qualifying Division 1 teams separated by less than half a point.

Rochester Adams came away with the regional championship, scoring a total of 792.12, while Plymouth was second with 791.98, Utica Eisenhower was third with 791.82 and Rochester was fourth with 791.74.

Adams was sparked to the win by its third round, which scored a state-best 322.50.

Stoney Creek was edged out from qualifying, finishing fifth with 788.94.

Adams and Rochester advance to Friday’s Division 1 state finals at 6 p.m. from the Delta Plex in Grand Rapids. The Highlanders have finished second in the finals the last two years, while R 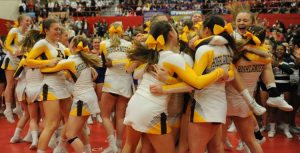 ochester last won the championship in 2017.