Photos and article courtesy of MIPrepzone
By Drew Ellis

For the first time, seeding is involved in the district tournament, with the top two teams being seeded in each bracket. 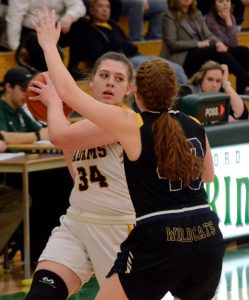 However, those top two teams weren’t given the luxury of a bye into the semifinal in most cases and had to open up their postseason on Monday.

That was the case for Rochester Adams, the second seed in the Division 1 district at Waterford Kettering.

The Highlanders displayed why they earned a top seed by running past Oxford in the opener, 53-34.

“Yeah, I don’t like it,” Lewis said with a laugh when asked about not having a bye as a top seed. “All of the kids didn’t understand and kept asking why we didn’t get a by 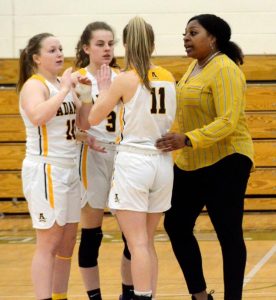 e if we were the No. 2 seed and I didn’t really have an answer for them. I like that they have seeded the two teams, but I think they should just seed the entire district. But, hopefully it works out that we make it to the final. We have to play three games in five days. That’s a lot of wear and tear on our kids after a long season, but we will bring our best each game.”

With the victory, the Highlanders (13-8) advance to Wednesday district semifinal where they will face the host, Kettering Captains, at 5 p. 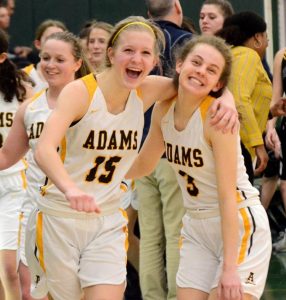 The Wildcats (6-15) did score the opening basket of the game to take a 2-0 lead, but the Highlanders quickly answered with a 9-0 run over 90 seconds thanks to their full-court pressure defense.

“We feel like defense is what can help us go far in the tournament,” Lewis said. “We a guard-heavy, but we are quick, so we want to use our pressure defense to the best of our ability and to our advantage.” 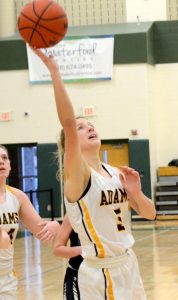 Adams wouldn’t trail again, but Oxford kept things close in the first quarter thanks to long inbounds passes that led to layups for the Wildcats. The Highlanders led just 14-10 after one, but broke the game open in the second quarter with a 17-4 run to open the frame.

“We just preach discipline, and when you coach high school kids, you don’t always get it for stretches. We had some defensive breakdowns early, but once we settled in and played disciplined, we were able to take control the game,” Lewis said.

The Highlanders maintained the double-digit lead throughout the second half, as they ha 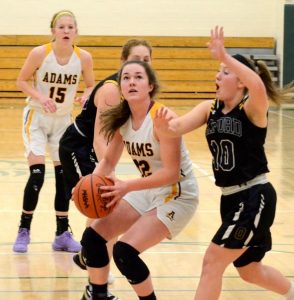 d a balanced offensive attack. Junior Lauren Petersmark and senior Nicole Claerhout each had 14 points to lead Adams in the win. Claerhout scored eight points during the second-quarter surge. 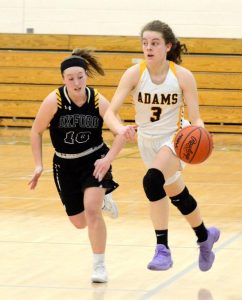 r us, so she does a lot of things right for us,” Lewis said of Claerhout. “She works incredibly hard and has been a great leader for this program. We, as a team, really want to make sure this is a special postseason for her and our other three seniors.”

Four other Highlanders scored six points or more in the win.