Article and photo courtesy of MIPrepzone
By Paula Pasche

WATERFORD — Rochester Adams was determined not to let the districts go the same way as they did last year when the Highlanders were knocked out by Waterford Kettering in the district finals. 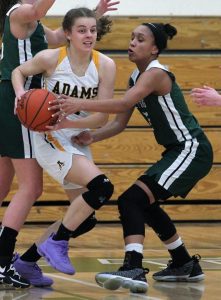 As a reminder, Adams coach Shay Lewis sent her girls a message on Wednesday afternoon.

“I texted them a picture from The Oakland Press last year with Kettering holding the trophy up and the headline that said they defeated us and I said, ‘We’ve got unfinished business, guys,’’’ Lewis said.

They went to work on Wednesday night and defeated Waterford Kettering, 58-42, in the district semifinals at Kettering.

The Highlanders (14-8) will face Clarkston in the district finals at 6 p.m. on Friday at Kettering. The Wolves defeated Lake Orion, 54-37, in the secon 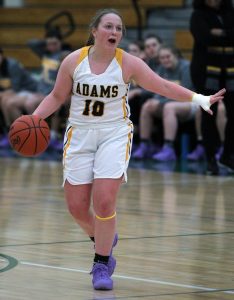 Adams appeared tight in the first half, missing shots it typically makes. Adams led 25-23 at the half.

“Our girls were nervous, they’re high school kids so they were nervous,’’ Lewis said. “I told my assistant coach to pull up a joke. She pulled up a knock-knock joke and it was so not funny it made them laugh. I think that loosened them up.

“We told them to calm down and relax we could put another half together that we’re better than this team and we can go out here as long as we stay calm and we’re collected, move the basketball, don’t give them second shots,’’ Lewis said. They executed the game plan.’’

She made adjustments at halftime to deal with Kettering’s zone.

“They didn’t play the defense we were expecting them to play until toward the end of the third and then we knew how to attack that,’’ Lewis said. “At halftime we had to make adjustments on how to attack the zone. We were standing around too much. We got some better movement and we were able to get some better shots and knock them down.’’ 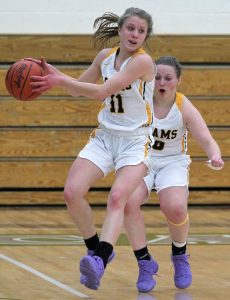 The Highlanders outscored the Captains 20-10 in the third quarter and expanded their lead in the fourth.  Adams was le 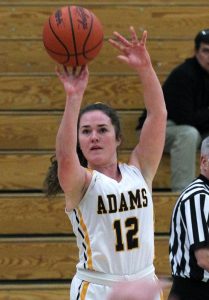 “They were ready, they wanted to get this and get back to the district finals,’’ Lewis said. “Kettering is a good team, they’re long, they’re bigger, everything we’re not. It’s a good win.’’

Kettering finished the season 10-11 and was led by senior Izzy Dugal with 15 points and sophomore Markayla Holland with 10.