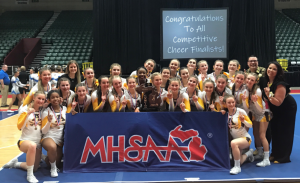 Article courtesy of MHSAA Second Half

By Dean Holzwarth
Special for Second Half

Friday was finally the Highlanders’ turn to take center stage.

Adams won the program’s first Division 1 championship at the Delta Plex by edging runner-up Plymouth. The Highlanders tallied a three-round score of 791.70, while the Wildcats finished at 790.74 in their first Finals appearance. 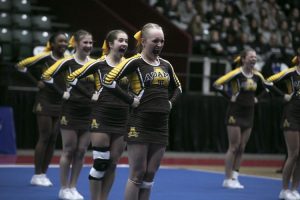 Adams had been knocking on the door after finishing runner-up the last two seasons. It also placed second in Class A in 1996.

“It’s great, especially my senior year,” Highlanders senior standout Katie Crowe said. “We’ve come close in second place the last two years, and we finally broke through that wall today with a young team. It is a tremendous accomplishment, and I’m so proud.”

Adams sixth-year coach Brooke Miller was elated to get over the hump and overcome the heartache of back-to-back near-misses.

“It was all the determination of these girls,” Miller said. “There are a lot of young girls on this team that really didn’t understand what it took to be there, but there’s a lot of sisters and girls that came into the program that just really wanted it. We just had a really great year and were all so positive and open to everything.” 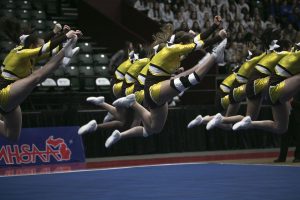 After a pair of solid rounds placed the Highlanders in the top spot, they cemented their victory with a Finals high score (322.10) in Round 3.

“The biggest things we talked about were heart and controlling your emotions, and we did that in the first two rounds to give us a great start,” Miller said. “And Round 3 was just about going out there and having fun and hitting it and doing it for the rest of the team

“Round 3 has been our best all year, honestly, and when we hit, we have a great day. I was not nervous about it because I knew these girls were capable of amazing things.” 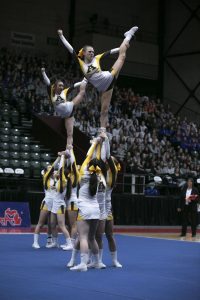 Senior Lyndi Harmon said the final round has been a staple in their successful season.

“Our Round 3 is pretty insane, and we’ve done some stunts that we’ve never done before and that no one in the state has done,” she said. “We hit it perfectly, and I feel grateful for everything this program has done for all of us. Knowing that our hard work paid off is the best feeling in the world.” 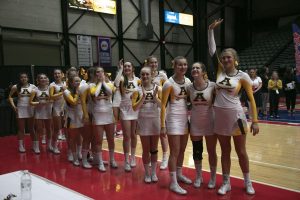 “We’ve had more experienced teams, but this is the most talented team I’ve had even though we have 17 underclassmen,” Miller said. “We’re going to have 23 returning state champions next year, so it’s going to be pretty awesome.”

Plymouth made a splash in its debut appearance at the Finals with three stellar rounds.

“These kids are absolutely incredible and have worked their tails off all season long to strive for perfection,” fifth-year coach Samantha Koehler said. “I couldn’t be more proud of them.”

The Wildcats also finished runners-up to Rochester Adams at their Regional by a narrow margin.

“We knew they were the best team in the state, so we were just chasing them,” Koehler said. “And to come in second behind them is just a dream come true.”

Plymouth was in third heading into the final round, but jumped to second with a third-round routine (321.70) that had Koehler in tears.

“Our Round 3 has been one of the best ones in the state,” Koehler said. “That was our deal breaker, and we knew we could count on it. They hit it, and it helped get us to where we needed to be.”