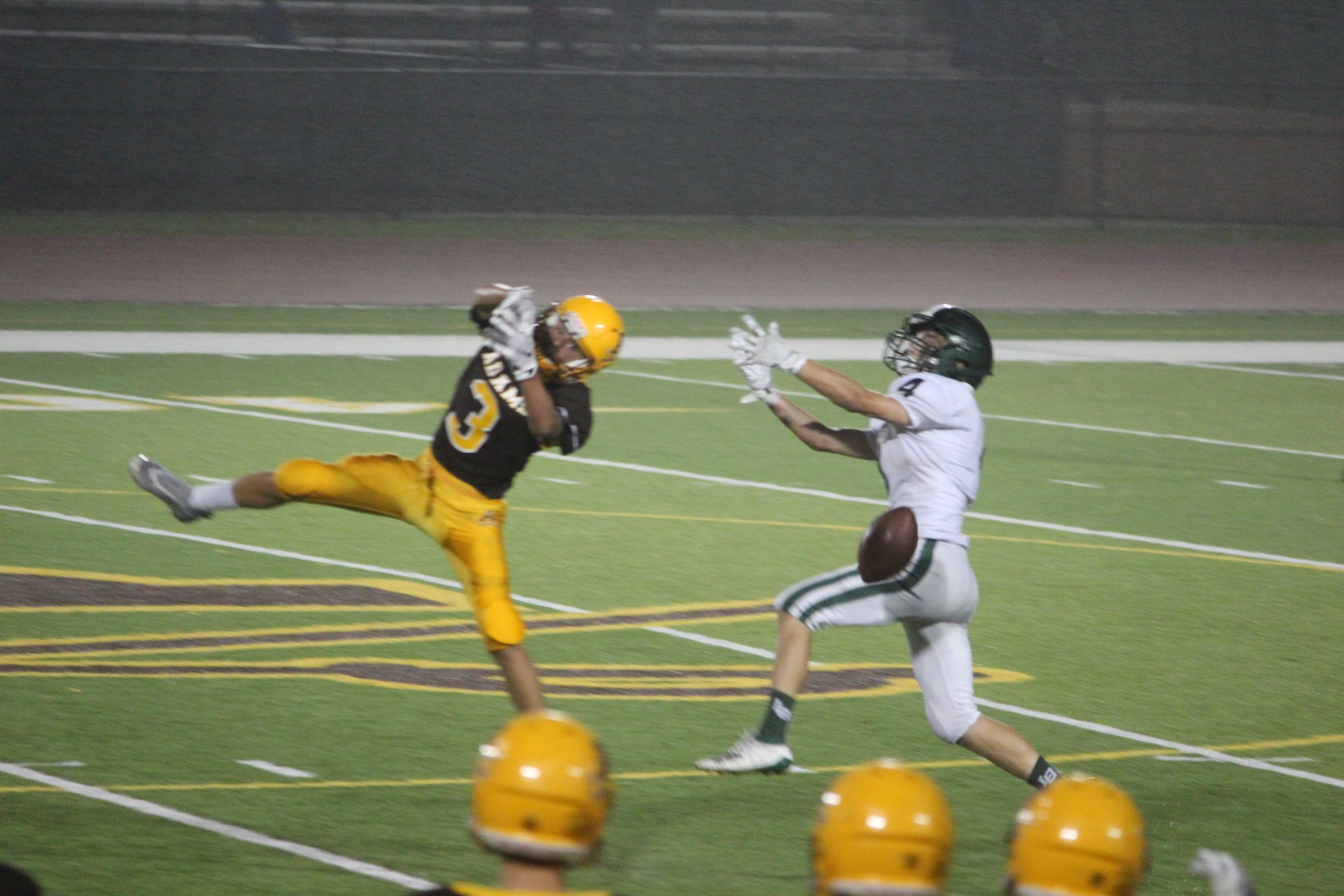 The Highlanders began the game on offense following a kick return to the 31-yard line by Christian Schomer. Carries by Luke Stockoski and Schomer advanced the ball, but Adams had to punt to Lake Orion. A tackle by Keenan Frazier had the Dragons at first and 10 from the 15-yard line. Marco DiCresce intercepted a pass and took the ball down the field to the 17-yard. With Adams back on offense, Stockoski got a first down and kudos were given to the offensive line: Andrew Rolfs, John Rittner, Frazier, and Finn Tobiczyk. Brendan Green ran in a swift 5-yard touchdown. Remini Tillotson’s extra point kick was good. Adams 7 – Lake Orion 0

The second quarter began with Adams on defense. Lake Orion was 3rd and 11 from the 25-yard line when Schomer and then Cibor broke up passes, forcing a turnover on downs. A couple runs, and a pass to Will Kroll advanced the ball, but the Highlanders had to punt. Highlanders took over on defense with 8:57 left in the second quarter. Strong tackles and stops by Vokal, Stockoski and Imran forced a turnover on downs. Back on offense, the Highlanders enjoyed a run by Green that took the ball to the 30-yard line. On a quarterback keeper, Marco DiCresce ran for an exciting 70-yard touchdown. Tillotson’s first kick was no good, but thanks to a roughing-the-kicker penalty, there was another chance. The extra point was good. Adams 14 – Lake Orion 0

With 5:00 left in the second quarter, Adams took over on defense. There was good pass coverage by Green and DiCresce, a tackle by Dyllan Sheppard, quarterback pressure from Rolfs, good defense by Kroll, and big tackles from DiCresce and Cibor, including a tackle for a loss of yards by Green. Eventually, Lake Orion scored on a run, but a host of Highlanders blocked the extra point attempt. Adams 14 – Lake Orion 6 This was the score at the end of the half.

To start the third quarter, Adams was on defense for just a short time, thanks to tackles by Frazier and Vokal and a pass broken up by Green. Following a punt, there was an exciting series of first downs by Stockoski, Schomer, Green and DiCresce. Stockoski scored from the 9-yard line and Tillotson’s kick was good. Adams 21 – Lake Orion 6

With 5:19 left in the third quarter, Adams kicked to Lake Orion. Great defensive plays, including a tackle for a loss by DiCresce, forced the Dragons to punt. The series was highlighted by advances, including a great 13-yard gain by Schomer. Early in the fourth quarter, an interception forced Adams on defense. Good tackles and incomplete pass attempts had Lake Orion backed up to the 4-yard-line. A Dragons fumble in the end zone signaled a safety and two points for the Highlanders. Adams 23 – Lake Orion 6

With 9:16 left in the fourth quarter, Adams made steady gains, including a run by Sheppard, but Adams had to turn the ball over on downs. Immediately, Max Cibor intercepted a pass, causing yet another turnover. The rainy game continued with the score remaining Adams 23 – Lake Orion 6 as the clock expired.