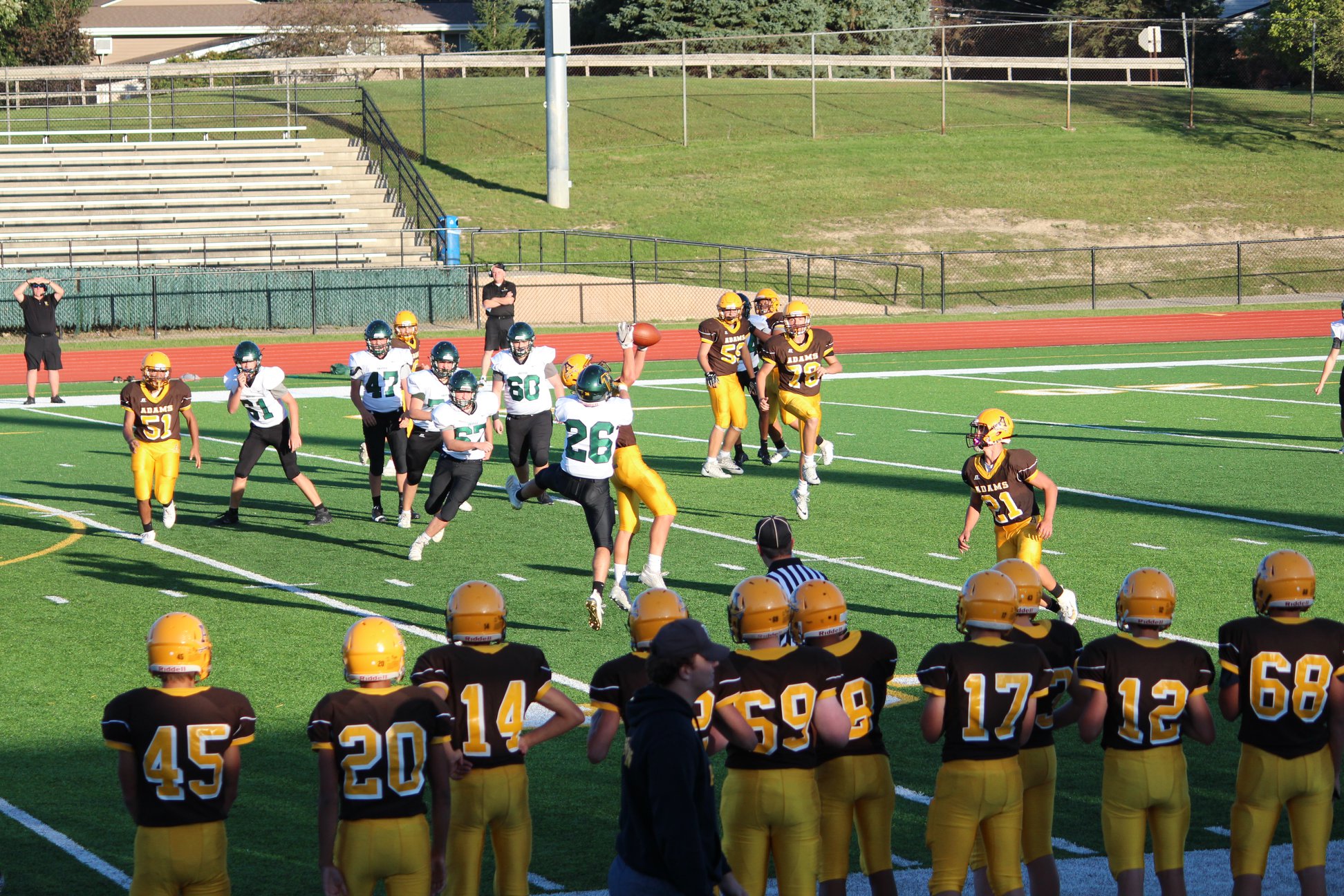 With Adams on offense, the game began with a nine-play, 64-yard drive with multiple impressive runs by Brendan Green, Luke Stockoski and Christian Schomer. The drive was capped off by an 8-yard touchdown run by QB Marco DiCresce. Remini Tillotson kicked the extra point. Adams 7 – Groves 0

Groves scored on their first possession, after a long pass. Adams 7 – Groves 7

Another drive for 60+ yards put Adams in scoring position, allowing a TD run by Stockoski with time remaining in the first quarter. Tillotson’s kick was good. Adams 14 – Groves 7

Groves punted on their next possession and Adams took over at their own 45-yard line. Runs from Green, Schomer, DiCresce, and Stockoski advanced the ball. On third and long from the 42-yard line, DiCresce had a long touchdown run. A missed extra point attempt made it Adams 20 – Groves 7 with 1:27 remaining in the half.

Green had a touchdown-saving tackle on the kick return and Groves started at the Highlander 44-yard line. A quarterback sack by Andrew Rolfs made it second and 16, and two incomplete passes forced the punt, which was downed at the 11-yard line. Adams ran out the clock to end the half.

The second half began with Adams kicking off and Groves took over at the 37-yard line. Pressure and coverage were provided by Keenan Frazier and DiCresce. Groves punted and downed the ball at the 2-yard line.

Adams took over deep. A first-down and several short carries set up third and long, when Green broke a run for a 25-yard gain. With the ball at the 45-yard line, at first and 10, DiCresce hustled downfield for 55 yards and his third touchdown of the night. A two-point conversion pass to Max Cibor was successful! Adams 28 – Groves 7 with 6:45 left in the third quarter.

Next, the defense was unable to hold the Falcons who scored on two long runs. Adams 28 – Groves 14

Groves attempted an onside kick, but touched the ball before it went 10 yards. Adams took over with first and 10, and the ball at the 50. Adams was unable to get a first down, falling just short on a fourth-down attempt.

Groves took over at their own 40. An incomplete pass was defended by Will Krol, and Schomer intercepted a Falcons pass. Adams offense took over at their own 39-yard line and was just short of a first down after a few carries and a fourth-and 11 gain of 10. On defense, Imran Mohid and Krol stopped the quarterback for a short gain to end the third quarter.

The fourth quarter began with Adams on defense. Nick Stokan and DiCresce stopped the Falcons on third and one for no gain. On fourth and short, Groves broke for a long TD run. Adams 28 – Groves 21 with 10:14 left to play.

The offense would put extra pressure on the defense by fumbling on first down and Groves recovering at the 12-yard line. Groves took over, with first and 10 at the 12. A holding call on second down backed them up to the 18-yard line and Dylann Sheppard got a sack to make it third and long from the 27. A pass was completed but the receiver was met quickly by DiCresce, bringing up fourth down from the 19-yard line. Quick pressure by the line forced the QB to run out of the pocket where he was knocked out of bounds by Krol, short of the first down. The Highlanders defense held the Falcons.

Adams took over and got some penalties called against them. After a delay of game and holding, the Highlanders were forced to punt from their own end zone. The pressure was on the defense again to respond as Groves took over from the Highlander 25 with just over 4 minutes left to play. Josh Vokal and Keenan Frazier stopped Groves for a short gain on first down and Sheppard defended an incomplete pass. After a completed pass on third down, Groves had the ball, with fourth and 2 at the 22-yard line. The defense came up with a big stop thanks to a host of Highlanders on the right side of the line. DiCresce picked up 14 yards, bringing up second and 1 as they tried to keep the clock running. Schomer picked up a first down and Highlanders tried to take time off the clock around the 29-yard line. After three more running plays, it was fourth down with eight seconds left to go. DiCresce attempted to run out the clock, but left Groves with two seconds on the clock with the ball at their 24-yard line. On the final play of the game, a long Groves pass was incomplete and the Highlanders won 28-21.