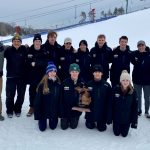 Boasting both the boys and girls individual Regional Champions in each event, Adams will be well represented at the State Finals on February 24th in Boyne.  The boys ski team claimed its fourth consecutive Regional title, with Colin Dehart winning both the Slalom and Giant Slalom events.  Kaylee Richardson and Alyssa Fodale will represent the 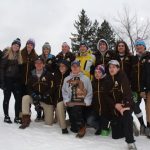 HARBOR SPRINGS – The boys combined team from Rochester Adams/Stoney Creek placed third overall at the Division 1 skiing finals Monday at Nub’s Nob, leading the pack of Oakland County boys and girls squads. Adams/Stoney Creek finished with 110 overall points and came in behind first-placed Marquette (which had 35 points) and second-placed Traverse 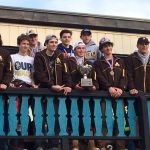 Following their Regional Championship title, the boys ski team continued their winning ways with the much coveted SEMSL (Southeast Michigan Ski League) title.  It was the second SEMSL title in as many years, as the boys earned top honors at Mt. Holly for only the 4th time (1998, 2000, 2016) in school history. The team competes in

Members of the girls team to also join the boys team at State Finals Following a first place finish at the Pine Knob Divisional Meet, the boys ski team won the MHSAA Regional championship at Mt. Holly.  Adams topped the field with 51 points, beating out Holly/Oxford (82) and Grand Blanc (108). The Highlanders Matt Corsi 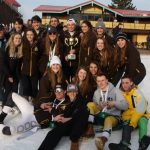 On February 6th, the ski teams had a successful day during the Lake Orion Invitational at Pine Knob, where the girls finished second and the boys team was the invite champion. 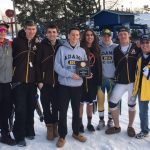 The boys ski team won the SEMSL league title for only the second time in school history and qualified for the State Finals in Marquette, where they finished 8th overall.